Where else for this week’s ’10 reasons…’ post but Brazil? This huge, beautiful and unique country will be attracting tourists by the thousands over the coming weeks, so here are our top tips – whether you’re visiting for the football and have a bit of spare time, or you’re planning a holiday for later in the year.

A beautiful island off the coast of Rio, which can be reached by ferry (no cars allowed – there are no roads for them to drive on anyway). It’s a great place to see local wildlife, and also has a fascinating history, having been a pirates’ lair, a leper colony and a prison in its time. 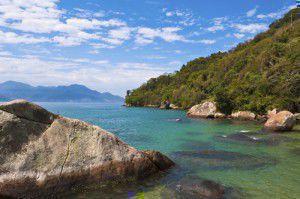 With over 7,000km of coastline, it’s no surprise that Brazil has a lot of beaches. It would be impossible to name them all, but a couple of the most famous are Copacabana Beach in Rio de Janeiro, which is particularly well known for its New Year celebrations, attended by about three million people each year, and Praia do Cassino, near Rio Grande in the south of the country, which is thought to be the longest beach in the world at an incredible 245km.

With over 180 indigenous languages, Brazil is a language lover’s dream. Although most tourists should be able to get around with a smattering of basic Portuguese, if you’re heading off the beaten track, you may hear people speaking Tupí, Arawak, Carib, and Gê languages, among many others.

Brazil is probably best known for samba, the African-influenced music and dance style now popular across the world, and celebrated most famously at the annual Carnaval in Rio de Janeiro. Samba is far more than just music; it’s a hugely important part of Brazilian culture, and you’d be hard pressed to visit the country without experiencing it (and why would you want to?). Capoeira is another well-known tradition, which combines dance, acrobatics and martial arts set to music. Someone once tried to teach me some capoeira moves at university. It did not go well – turns out it’s quite difficult, especially if you’re as uncoordinated as I am – but it’s great fun to watch.

Found on the border between Brazil and Argentina, the Iguaçu Falls (or Iguazu Falls if you’re in Argentina) are one of the region’s most famous natural landmarks. There are 275 waterfalls in total, along a 2.7km stretch of the Iguazu River. Be sure to see the Devil’s Throat, a U-shaped chasm right on the border between the two countries, and if you can, take a boat trip under the falls for the ultimate water ride. 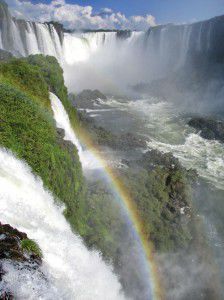 Another world-famous landmark, and one of the New Seven Wonders of the World, the 124 feet high statue of Jesus Christ hit the headlines last week when travel blogger Lee Thompson was given permission to climb to the top to take a selfie. Towering over the city of Rio de Janeiro from the top of the Corcovado mountain, the monument is a must-see if you go to Brazil. Unlike Lee, you won’t be able to go inside the statue, but you can visit the chapel in the pedestal at its base and the views from the mountain are still amazing.

Staying in Rio, if you want to get away from the crowds, why not try a spot of sea kayaking in Paraty Bay? Whether you’re a beginner or an experienced kayaker, this is a great way to enjoy fantastic views of the town and mountains, relax on the beautiful sandy beaches and explore a mangrove forest on your way to the base of the Sugarloaf mountain.

The rainforest, not the website. Not an area to venture into unprepared, or alone, obviously, but great if you’re tired of the cities and want to get back to nature. Take a boat trip down the river, have a treetop adventure (there’s even a hotel), or try your hand at piranha fishing (not sure about that one, personally). The rainforest is full of wildlife, although many of the animals and birds will keep themselves to themselves, so if you do encounter any, it’s pretty exciting. 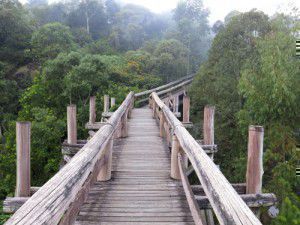 Being a huge country, Brazil has many, many types of food, from feijoada (a black bean stew with beef and sausage), to pastéis (deep fried parcels containing pretty much whatever you like – cheese, beef, cod, you name it), quindim (a custard dessert made from sugar, egg yolks and coconut) to bolinhos de chuva* (fried doughballs sprinkled with sugar and cinnamon). It’s safe to say that whatever your tastes, you’ll probably find something you like in Brazil.

* I’m tempted to go to Brazil right now for some of these.

Someone told me there’s a big football tournament happening in Brazil this month, so if you’re a fan, now might be a good time to visit. I don’t know about that, but I do know Brazil are a huge footballing nation. They’ve won the World Cup (that was it!) five times, more than any other nation, and will be hoping to make it six in a few weeks. If they can get past England, obviously…

If you are visiting Brazil, remember to learn some basic Brazilian Portuguese before you go – it’ll make everything a lot easier and much more fun. Take uTalk for iOS with you and you’ll never be lost for words!

I realise I’ve barely scratched the surface of what this huge country has to offer, so if you want to share any tips of your own, please do so in the comments.