It’s been another busy year at EuroTalk, with new products, new languages… and a new puppy. Throw in a royal encounter and a cake that looks like a Dalek, and you’ve got the makings of an interesting twelve months.

In June, we launched our new app for iPhone and iPod touch, uTalk. This had been in development for a long time, and we were really proud and excited to be able to share it with the world. It’s got more content and more activities, and it’s free to download and start learning the essential words you need to get by in 60 languages. We’ve been adding more languages regularly since the app was launched, and will continue to do so over the coming months. So if we haven’t yet got the language you need, don’t worry – we soon will.

And that’s not all. Last month, we added Lao, the official language of Laos and also spoken in the north east of Thailand, to our range with the release of Talk Now, our beginner program for PC and Mac. Lao has about 15 million speakers worldwide, and is a language we’ve been wanting to offer for some time now. There are more new languages on the way in 2014, so watch this space…

This year also saw the launch of part 2 of our second maths app, Maths, age 4-6, and two new practice apps – Count to 10 and Count to 20. We also released a version of Maths age 3-5, for schools, so teachers can use the app in the classroom. 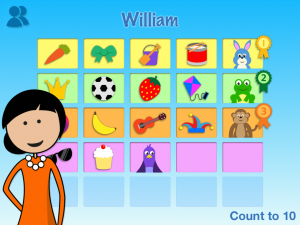 We’ve been working in Malawi now for several years, as part of our mission to ensure one billion primary age children reach their full potential in numeracy, reading and English. This year, Dr Nicola Pitchford from the University of Nottingham conducted an evaluation at Biwi Primary School in Malawi, to measure how effective our maths apps are for the children’s learning, compared to other teaching methods, including other apps. The preliminary results show that not only did the group using our apps perform significantly better than the other groups, but in fact they tripled their maths knowledge in just eight weeks. This is really exciting and encouraging, and we hope now to scale up the project in Malawi to reach more children, in more schools. 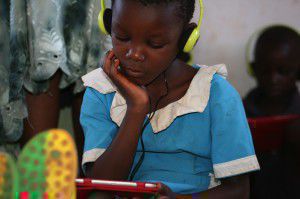 2013 saw the return of the JLC, after a year off in 2012. Our annual language learning competition for primary age children across the UK is always very popular, and this year was no exception. We were joined at the final by Martha Payne of NeverSeconds, who at just 10 years old, has raised over £140,000 for Mary’s Meals, a charity providing school dinners to children in Malawi. Martha, with her dad and her sister, was our special guest and handed out the prizes to our finalists, including the JLC Champion for 2013, Ella Whittingham from West Bridgford, Nottingham.

In October, Steve was honoured by a visit from Her Royal Highness Princess Maha Chakri Sirindhorn of Thailand, while at an exhibition in Bangkok. The Princess came to have a look at the EuroTalk stand, and later Steve presented her with a gift on behalf of the company. He had to be instructed on the correct way to bow, and fortunately he got it right!

This year, we’ve said a sad goodbye to Glyn, Tom and Hanna, but welcomed Safia, Seb and Pablo. We’ve also been lucky to have Lorena with us from Germany for a few months; you may have enjoyed some of her blog posts! And in August we welcomed Molly the puppy, who caused a certain amount of mayhem, but was very easily forgiven because she’s so cute. 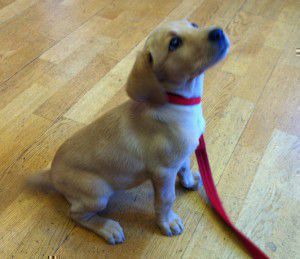 We entered into the ‘spirit’ of Halloween by getting dressed up for the occasion. With everything from vampires to skeletons, pumpkins to werewolves, we were quite a sight to behold. Although some of us were scarier than others… 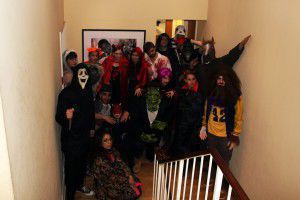 We’ve always enjoyed a bit of cake here at EuroTalk, but this year we’ve been thoroughly spoilt, with keen bakers Safia and Alex (but mostly Safia) providing us with masterpieces like this amazing Dalek cake. (It took us three days to eat, but it was totally worth it.) 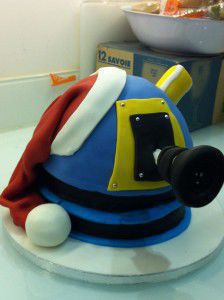 And so the year has come to an end in style. Thanks as always for reading our blog, and to our guest bloggers who’ve been in touch over the last year. Please do contact us if you have something you’d like to share!