From September this year, it’s going to be compulsory for primary schools in the UK to teach a foreign language. This is causing quite a lot of stress for schools, according to a report published earlier this week, which says that 29% of teachers don’t feel confident about teaching a language to their students. That’s hardly surprising, considering many teachers haven’t studied languages themselves since their GCSEs, which for some will have been quite a while ago.

But despite this, the report says, 85% of primary schools have said they believe making languages a requirement is a good move, and many are already tackling the situation head on by introducing languages before it’s required by law. 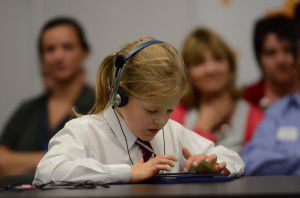 So what exactly is the point of teaching languages at such a young age? Many people will argue that the curriculum for children is already too full, with a need for English, maths and science, as well as citizenship, history and physical education, to name just a few. Why squeeze in yet another subject, especially in a world where many people believe that ‘everyone speaks English’?

Learning a language is good for your brain

Well firstly, learning a language can actually make you smarter. The positive effects are well documented – bilingualism makes you better at problem solving, planning and verbal reasoning. Research by psychologists at Penn State University has shown that if you’re bilingual, you’re likely to be better at multi-tasking, because your brain is used to ‘mental juggling’. And other studies have shown that learning another language can help to delay the onset of dementia in later life.

It makes you better at your native language

Studying a second language helps you to understand your own, because it makes you think about how language is formed. Because I grew up speaking English, I don’t really remember learning the rules of the language; they just came naturally. But when I took up Spanish, suddenly I needed to think about grammar, and about how I was structuring sentences, which is much more important in Spanish than in English. For example, in Spanish you can’t end a sentence with a preposition, which made me realise how often I was getting away with this in English. And I would never have even known the subjunctive existed if not for my Spanish studies (although I’m not going to lie and say I use the subjunctive regularly in English!).

Learning a language prepares you for the rest of your life

I don’t just mean learning languages at secondary school, although it’s likely that children who leave primary school with some knowledge of another language will want to continue it when they move on. I mean beyond school – when the time comes to choose degree courses and, even more importantly, find a job. A recent article in The Economist says that employees with a language in the U.S. can earn on average 2% extra, which may not sound like much, but over time can add up to some serious money. Not only that but learning a language will make it easier for you people to go travelling and see the world; it might even help you find the love of your life!

The younger, the better

It’s a common argument that children are better at learning languages than adults; because of the way the brain develops, some scientists believe there’s a ‘critical period‘ for language acquisition. And although there’s plenty of evidence that this might not necessarily be the case (just look at Benny Lewis, who didn’t start learning languages until adulthood, and now speaks twelve languages fluently), I do think there’s something in it; after all children are constantly learning new things, so one more probably won’t phase them. And they’re also in a better position to learn than adults, who are very good at finding other things to do and worry about. (I know I am.)

Some people might disagree with me here, looking back on their own language classes at school with its endless repetition of vocabulary and verb conjugations. Obviously I’m biased, but I do think learning to speak another language can be really fun if it’s put across in the right way. There are so many exciting ways to teach a language, from songs and TV shows to games and apps. The internet is full of great ideas – have a look at #mfltwitterati on Twitter as a good starting point.

Or check out the Junior Language Challenge, EuroTalk’s national competition for children aged 10 and under across the UK – it’s great fun for children, makes life easy for teachers and raises money for charity all at the same time. Just the other day we received a message from one of our 2013 finalists, who said, ‘It was a great adventure. It’s now set me off to learning languages from all over the world.’