The other day a colleague was telling someone his email address in French. He was halfway through and ran across a problem. He didn’t know the word for “the little ‘a’ in the circle”. In English we just say ‘at’, but that translates as ‘à’ in French and that sounds remarkably like the letter ‘a’. See the problem?

What he should have said was ‘arobase’, but different cultures call it completely different things – from official names to animal-based nicknames. Below we’ve found some of the most creative words for “the little ‘a’ in the circle”: 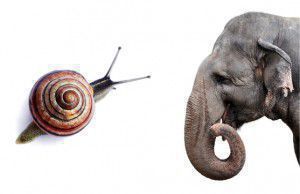 The Germans, Romanians and South Africans (among others) all describe it as a ‘monkey tail’.
Thai and Hungarian people call it a ‘worm’ and the Italians refer to it as a ‘snail’.
The Swedish and Danish describe the shape as an ‘elephant’s trunk’ and the Greeks think it looks more like a ‘duckling’.

The “little a” isn’t only used in email addresses. In Spanish, the symbol is sometimes used to represent masculine and feminine gender in the same word, for example ‘amig@s’ means male and female friends, although this is frowned upon by the Real Academia Española, so we don’t recommend it!

And in Portugal and Brazil, the symbol is used in text messages to represent ‘french kiss’ – so be careful how you use it if you’re travelling in those countries…

What do you call the @ symbol?