Now I have lived for more than two months in London. And one thing that struck me, is that I see little objects from the Harry Potter movies. I think it makes a difference if you live in England and see the movie, or you live in Germany, like me.

In Germany we don’t have double-decker buses and in one scene, there is a double-decker bus that changes its width. The first time I saw a double-decker bus driving in the city, I remembered this scene. The bus driver in Harry Potter was crazy (drove against the traffic!) and drove very fast through the streets. I know it’s only a movie, but… So I was thinking: “Should I get in? I need this bus, because it will take me to my language school. It is only a bus!” I had no choice but to take a deep breath and get on with it. The bus drove off and thank god, nothing special happened. 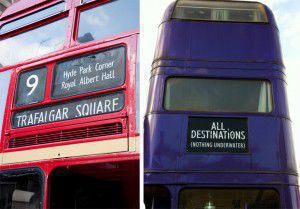 I see the architecture in London too. Some areas are similar to the area where Harry Potter lived with his adoptive parents, the Dursleys. I sometimes have the feeling that I have dipped into a different world when I walk around.

Also a typical accessory is the umbrella! As an Englander you need it, because you don’t know when it will start to rain. It is every day a new surprise. And Hagrid, one of the characters, uses it to get in the magic world where the magicians live. He taps the bricks and suddenly the wall opens like a door. Most people always have a umbrella here. Then there is the questions from the perspective of a German, are the people with an umbrella maybe magician? Is the story of Harry Potter true?

Sometimes when I go home, I see lots of people running, running, running! I think, why they always so hectic? They can take the next train. Or? But now I have the answer why! Because they don’t take the train. That is too boring for people here and that do only ‘normal’ people. Here in London you are running, because they do it like Harry Potter and all the other magicians! I think in London everywhere are distributed lots of similar platforms like the platform 9 ¾ at the Kings Cross Station. And instead of catching the Hogwarts Express, they  catch the Home Express! Yes, I am sure that is the answer!

Also, when I saw the first time all the children with the beautiful school uniform (in Germany we don’t have uniform) that reminds me of the movie. Everyone here has a different logo from the school they go to. It is like the four houses in Harry Potter:  Gryffindor, Hufflepuff, Ravenclaw and Slytherin. And after the school they get out their Nimbus 2000 and start searching for the Golden Snitch? Yes, here in London nothing can surprise me any more! They all look like little magicians! I thought, Lorena, you are in a magic city.